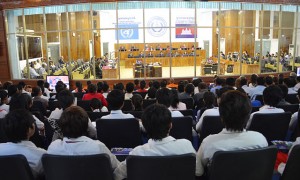 The Supreme Court held that the question of competency to stand trial may be raised at ANY time during the criminal proceedings.  Furthermore, they held that the Court had an obligation to raise the question after being confronted with evidence that would raise a “bona fide doubt” as to the defendant’s competence, whether or not defense counsel requested a competency evaluation.  In the Court’s opinion, failure to observe procedures adequate to protect a defendant’s right not to be tried or convicted while incompetent to stand trial is a deprivation of due process.

The Supreme Court held that any evidence of a defendant’s possible incompetence to stand trial must be addressed regardless of the stage of the proceedings.  failure of the court to make further inquiry in such a situation violates due process.  The court found that a number of factors may call for a competency evaluation including: (1) Evidence of a defendant’s irrational behavior; (2) The defendant’s demeanor at trial; and (3) Any prior medical opinion on the defendant’s competency.  The court found that all of these factors are relevant in determining whether further inquiry is required, but that even one of the factors standing alone might, in some circumstances, be sufficient to warrant further inquiry.

In regard to burden of proof, the Court ruled Oklahoma’s law that allowed the State to try a defendant who is more likely than not incompetent was unconstitutional as it violated the Due Process Clause.  In other words, the State must have the burden of proof by at least preponderance of the evidence that the defendant is competent to proceed with trial.

The competency standard for a defendant to plead guilty or waive the right to counsel does not have to be higher or even different than the Dusky standard for Competency to Stand Trial.  The Court held that there was no reason for the competency standard for either of those decisions to be higher than that for standing trial.  This was based on the Court’s opinion that the decision to plead guilty is no more complicated than the sum total of decisions that a defendant may have to make during the course of a trial, such as whether to testify, whether to waive a jury trial, and whether to cross-examine witnesses for the prosecution.  In addition, the Court held the decision to waive counsel did not require an appreciably higher level of mental functioning than the decision to waive other constitutional rights.  The Court rejected the argument that a defendant who chooses to represent himself must have greater powers of comprehension, judgment and reason than would be necessary to stand trial with the aid of an attorney.  The Court held that a higher standard was not necessary to ensure that a defendant is competent to represent himself, because the ability to do so has no bearing upon his competence to CHOOSE to represent himself.  Simply put, the competence in question is the ability to WAIVE the right to counsel, NOT the ability to represent oneself.  The court also held that finding a defendant competent is not all that is necessary before he may be permitted to enter a guilty plea or waive right to counsel.  In addition, the trial court must satisfy itself that the waiver is KNOWING, INTELLIGENT, and VOLUNTARY.  This case superseded Seiling v. Eyman (9th Circuit 1973), which set the standard for Competency to Plead Guilty as the “reasoned choice” standard.

The U.S. Supreme Court held that information obtained in a court-ordered competency evaluation as to the issue of future dangerousness was inadmissible at the penalty phase of a trial if the defendant had not been warned of his right to remain silent and that any statements he made could be used against him.  The Court held that admission of such evidence was a violation of the 5th Amendment right against self-incrimination and the 6th Amendment right of right to counsel since defense counsel was not informed in advance that the examination would cover the issue of future dangerousness.  The Court noted that there was no distinction between the guilt and penalty phases of the trial with regard to the defendant’s rights.  Furthermore, the Court noted that the defendant’s responses in an in-custody, court ordered evaluation could not be considered to have been given “freely and voluntarily” unless the defendant had been informed of his rights.

The court ruled that incompetent defendants may not be committed indefinitely.  A person committed to a mental hospital based solely on account of incompetency to stand trail cannot be held more than a reasonable period of time necessary to determine if they will attain competency in the future.  “Due process requires that the nature and duration of commitment bear some reasonable relation to the purpose for which the individual is committed.”  If after a reasonable period of time it is determined it is unlikely that the defendant will regain competency, he must either be civilly committed  through proceedings applicable to those not charged with a crime or be released.  Failure to conform to this procedure is a violation of the due process clause of the 14th Amendment.

This ruling gave the judge guidelines on how to evaluate if a person with amnesia has had a fair trial.  It was ruled that amnesia alone does not render a defendant incompetent to stand trial.  Factors to be considered in determining competency of an amnestic defendant include the extent to which the amnesia affects the defendant’s ability to:  (1) Assist counsel; (2) Testify on his own behalf; and (3) Extrinsically reconstruct the events of a case.  Other considerations included;  (1) The strength of the State’s case; (2) The extent to which the State assisted in the extrinsic reconstruction of events; and (3) Any other facts or circumstances which would indicate whether or not the defendant had a fair trial.

The Supreme Court ruling held that a guilty plea is valid if it represents a voluntary, knowing and intelligent choice among reasonable alternatives.  It is not compelled within the meaning of the 5th Amendment even if it is entered to avoid a harsh penalty, such as in the case of the death penalty.  Choosing to enter a “best interest” plea such as this is now known as an Alford Plea.

This case dealt with how to determine if a confession is voluntary.  The Court held that competency to confess is dependent on whether or not: (1) The confession is VOLUNTARY and free from susceptible coercion; (2) Waiver of Miranda Rights is voluntary, and (3) The defendant’s reliability is impaired by any mental disability.  The Court found that coercive police activity was a necessary predicate to finding that a confession is not “voluntary.”  After Connelly, statements not caused by police misconduct are admissible regardless of defendant’s mental state unless the defendant did not understand he could remain silent (i.e. understand his Miranda rights).

The Court held that medication to restore trial competency for serious offenses could be administered involuntarily under certain circumstances.  Because of this case, Competency to Stand Trial evaluations now often also have to offer an opinion regarding if the defendant should be forced to receive psychiatric medications based on the Sell criteria.

The Court ruled that an insane person (they meant an incompetent person) cannot be put to death.  They found that the common law against condoning the execution of the insane — that such an execution has questionable retributive power, presents no example to others, has no deterrence value and offends humanity.  The test for competence to be executed enunciated in Justice Powell’s concurring opinion is whether the prisoner is aware of his impending execution and the reason for it.

The Court ruled you cannot force an inmate on death row who is incompetent to be executed to be medicated in order to restore his competency to be executed.