Contract in such Australian cases 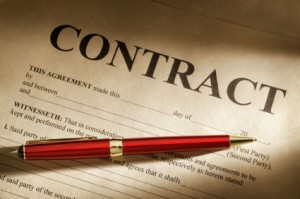 According to Common Law System, Contract is made from agreement, intention and consideration. Agreement itself is resulted from offer and acceptance which imposes legal rights and obligations between the parties in which the rights and the obligation will be protected by the courts, while intention itself comes from the parties that has to affect their legal relationship and consideration itself will be enforced to the parties as a legal binding. (Vermeesch and Lindgren, Business Law of Australia 10th Ed., Butterworths, Australia, 2001. p.47)

Carlill v. Carbolic Smoke Ball Company [1893] showed the facts that there was:

There are three facts that show an offer:

There are two facts that show acceptance:

‘  Intention to be legally bound

There are two facts that show intention to legally bound:

v  Lindley, L.J. argued that the consideration could be drawn:

ñ  Directly beneficial to defendant such as: the increasing in sales production that caused by the confidence of the public to use this product.

ñ  There is ample consideration for the promise.

v  Bowen, L.J. stated that the inconvenience of one party by using the smoking ball was enough to create a consideration and also the defendant received an indirectly benefit from this user because of promoting their sale.

The distinctive of the Australia federal system:

v  The 3 arms of Australia government are segregated into three arms; Executive, Legislature and Judicature.

v  There is powers distribution from central government to state governments (6 states) and both of them have parallel systems of government in which the states get the rest of power to express and residual powers from the Federal government.

v   The Australian federal system is a constitutional monarchy because until now the Australia’s head of state is still Queen Elizabeth II that embodied by governor-general as her representative (s.61 constitution).

The differences between a unitary system of government and the Australian federal system are:

The similarities and differences of the Australian federation model with those of the USA and Canada are:

v  There is division of legislative powers amongst them.

The heads of legislative powers

The separation of powers in Australia

The title: (the Nature of the proceedings) is Katsuno v the Queen. This case is an appeal case, which held in the High Court of Australia in which this case is criminal case because there is the Queen (Regina) as one of the parties. The Parties are Katsuno as appellant and the Queen as respondent.

The purposes of the catchwords are;

(ii)   to let you know what the case is all about,

(iii) to look at the main argument of the case that will be argue or become the reason of the argument,

(iv) an overview of the case of Katsuno and the Queen.

The catchwords’ authority in this case does not have binding authority.

The court position in the court system of Australia: in this case would held on the High Court of Australia. The High Court is the highest court in Australia for both the Federal and the States judicial structures. Its original jurisdiction is set out in chapter III ss75-76 of the Constitution. This jurisdiction relates to all subjects matters like:

(a)    arising under treaties

(b)   affecting consuls or other representatives of other countries, etc (s.75); or

(c)    arising under the constitution (interpretation)

Also, the judgment of High Court for all cases is final and conclusive.

The two principle issues that the court had to decide:

Based on this case, the principles are:

(1)   the contravention of implementation of the Jury act  especially s. 21 and s. 67 of the Juries act in which s. 21 states Copies of panel to be made and s. 67 states willful offence by persons under this act 1991

(2)   the effect of this contravention to the judgment of the appellant in which all judges (Unanimous) agree the breach of this jury act.

How the potential jurors can be challenged: by peremptory challenges (s.34) and  challenges for cause (s.38).

These challenges have to done in order to see the relationship between the Crown and the defendant in terms of implementing peremptory challenges (s.34) and challenges for cause (s.38).

The Law of Torts

(a)        This case was the most famous tort cases that created a lot of tort principle particularly the neighboring principle.

(b)       It affirmed the separate existence of the tort negligence on the basis of the duty of care in negligence.

(c)        The decision in this caseasserts that aduty of care might exist between parties who are unknown to one another and are not the subject of any pre-existing legal relationship.

The duty of care is owed to the Plaintiff because the defendant appreciates the risk of injury or damage. It can be seen in some circumstances:

The Law of Trusts

v  The role of the settler,

Settler is person who provides the property the subject of the trust.

v  The role of the trustee,

Trustee is the legal owner of the property. It can be individual, company or anyone who is capable to hold the property because there is no restriction on who can be appointed a trustee. In addition, a trustee is appointed by settler or by the exercise of a power of appointment or by statute.

v  The right of the beneficiary,

Basically, beneficiary has an equitable in the property because the trust is no regarded as a separate entity.

v  The trustee’s duty towards the beneficiary,

The general duty of a trustee is to act in good faith on behalf a trust ( ut most good faith ubberrimae fidei). However, there are other obligation:

v  The concept of dual ownership of the trust property mean the settler acts on behalf of the beneficiary until it is allowed to have its own property. In this light, the executor or solicitor is the legal ownership of the property, while beneficiry has an equitable ownership.

(b)   The creation of express trusts are expressed into three certainties:

In this light, to create a valid trust no consideration is necessary as long as the intention is clear.

In this light, it refers to the property of the trust and it must be described with sufficient certainty for the trust to exist.

In this light, it refers to legal individual. It means that it have to be in list certainty. However, there is a reduced requirement for it for charitable trust. Generally, the beneficiary can enforce a trust, but the Attorney-General enforce charitable trusts.

(c)    Express trusts can be set up into two ways: